On the Campaign Trail: Duck for President 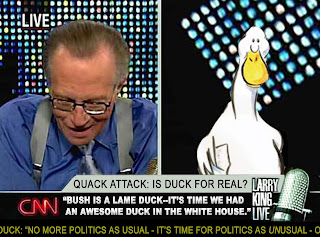 Against all odds, Duck is continuing his historic bid for the presidency of the United States. Lately, in order to keep himself in the public eye, he has been making the talk show rounds. Here are some soundbites from his interview with Larry King:

On Senator Obama: "I agree with the Senator when he says that it's time to get beyond politics as usual. The difference is that I am willing to take it a step further. I think it's high time we entered into an era of politics as unusual. And what would be more unusual than having a humble barnyard duck your Commander in Chief?"

On His Temper: "I know that there is a video floating around on YouTube that has caused quite a stir. I admit that in my past I have had some anger management issues... but trust me, they are nothing compared to John McCain's legendary outbursts. Plus, that cougar had it coming."


For more information, visit www.duckforamerica.com.
at 4:34 AM

I really like your writing style, great info, you putting so much effort into this blog. thanks for share with us.